Thailand Is Catching Up on The E-commerce Game

Although not the most populous or wealthiest country in Southeast Asia, Thailand is currently at the epicentre of an e-commerce boom. It has the fourth largest e-commerce market in the region, a market that is set to blossom to a value of US$11.1 billion by 2025. The following factors are powering this progress:

It appears that 4G development and the growing middle class are at the crux of the transformation, where faster connectivity is becoming more available to more people with disposable income. The rapid expansion has resulted in a slew of international companies and heavily backed start-ups looking wanting to form partnerships or launch e-commerce solutions in the country.

Sixty-seven percent of the Thai population have access to the internet, according to the latest report from We Are Social. But in a population of 68.3 million people, only 52 percent are living in urban environments with easy access to internet.

Despite infrastructural issues, internet usage has grown 21 percent since January 2016, enabling 8 million more people to become active on social media on their mobile devices. The use of mobile phones in Thailand is well-documented with 105 percent market penetration and 96 percent of the population owning at least one mobile phone. Over 21 percent of Thais have a smartphone, 26 percent have a computer, and 11 percent own a tablet.

The use of laptops is on a sharp decline, down 46 percent last year, but mobile phone usage rose by 47 percent.

Here, we can see an increasingly online, mobile, and social media-based market.

Ninety percent of Thais use their phones as their primary means to get online. By far, the most common use for smartphones is visiting social networks—46 million are active social media users, about 67 percent of all Thais or virtually everyone who has internet access.

The average daily time spent on the internet using a desktop computer is eight hours and 49 minutes. The average for mobile phones is 4 hours and 14 minutes, over half of which is spent on social media, with 85 percent of the population noting that they use social networks at least once a day.

But how do these numbers relate to purchases? Well, a surprisingly high 41 percent of Thais said they have made a purchase online in the last 30 days through a mobile device, while only 29 percent made a purchase with a laptop or computer. It is no surprise that social networks drive purchases, with 50 percent of online shoppers buying products through these platforms.

E-commerce makes up a small portion of internet usage and a thin slice of the whole commerce pie. Only 1 percent of the Central Group’s revenue came from online sales last year. With that said, e-commerce has been growing rapidly and is expected to increase more than 15 percent annually over the next four years.

To speed up the development, the Thai government, together with Alibaba, developed late last year an initiative called “People and Talent Development Program,” which aims to train the 30,000 Thai SMEs involved with Alibaba and 10,000 people in digital development.

Although cash is king in Thailand, most transactions are carried out via bank transfer. There has been a surge of fintech players developing mobile wallets (e.g. Rabbit Line Pay, Air Pay, Digio, and Alipay). They have all tried to move into the market by providing solutions that those without a bank account and/or credit/debit card can use to make transactions. 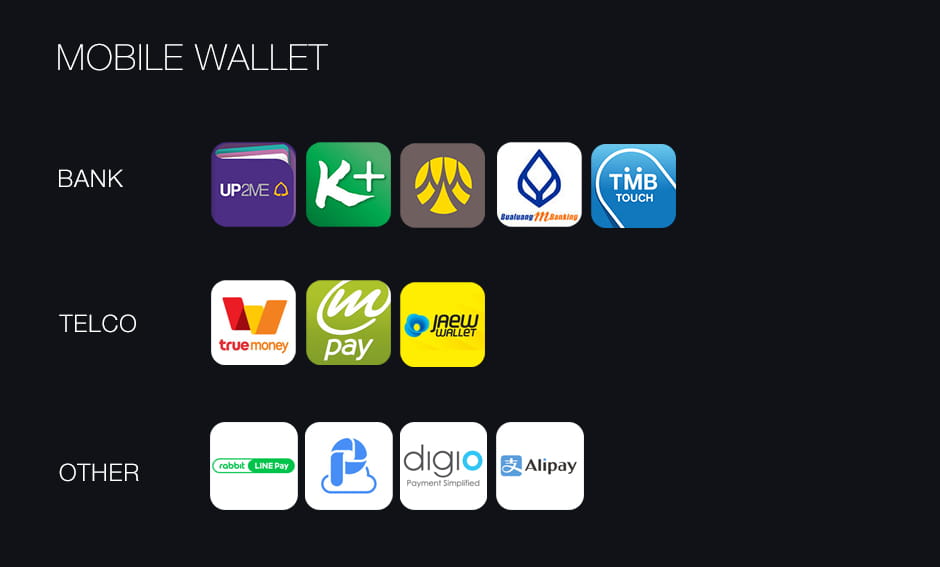 The younger generation is leading the way in breaking down barriers, with 32 percent having made cross-border payments last month and 40 percent saying they are more likely to use alternative payment methods like cash on delivery, e-wallets, and PayPal than traditional methods like using debit or credit cards.

There will be big wins for the fashion, electronic, and media markets. As the country familiarizes itself with e-commerce, fashion will inevitably be on the rise (ex. Zalora’s acquisition by Central Group).

Lazada and Alibaba are both geared toward the electronics market, especially as Amazon tries to join in the competition.

The growing middle class is what makes emerging markets so appealing to companies. Thailand’s average revenue per consumer is expected to double in the next five years.

Ultimately, this is the most important: How much disposable income do Thai people have and are willing to spend online?

Patience is key in a market that is being heavily invested in. Hurdles will appear but they can be overcome as Thailand’s e-commerce push comes to fruition.